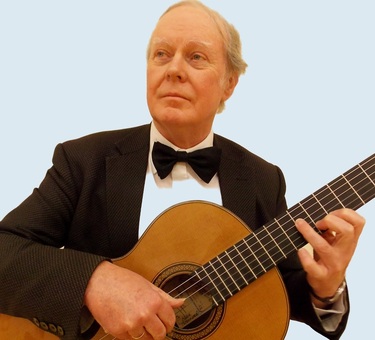 John Mills began learning the instrument at the age of nine. He  subsequently studied with John Williams at the Royal College of Music, London, and with Julian Bream and Andrés Segovia, in master-classes in England and Spain respectively. Segovia later commented that Mr Mills playing "had purity of technique and musical sensitivity".  In 1970, he was a prize-winner in the Greater London Arts  Association search for talented young performers, and he then made his official  London debut at the Wigmore Hall the following year. His international debut came in 1972 with a tour of Eastern Canada, and he has since given hundreds of performances in North America, Europe, Scandinavia, S. E. Asia, Australia and New Zealand, as well as a vast number of recitals on the British circuit. Since the early 1970's, John Mills has performed in many BBC radio broadcasts, many of them in the celebrated Radio 3 series "The Classical Guitar." He was the first guitarist to perform in the then newly-built Queen Elizabeth Hall, London, (subsequently giving two more concerts there) and has appeared many times in recitals and chamber music concerts at the Purcell Room and Wigmore Hall.  Also in demand around the world for master-classes and seminars, his books "Music from the Student Repertoire" and "The John Mills Guitar Tutor" are best-sellers. In the 1980s John Mills also contributed much to the development of high-quality student and concert guitars, working in combination with the Japanese company Asturias, and giving two series of sell-out recitals in Japan. Between 1985 and 1988, John Mills and his wife, concert guitarist Cobie Smit, resided in New Zealand, based at the Nelson School of Music. In addition to a huge number of concerts and broadcasts, they also played to HM Queen Elizabeth and Prince Philip at a two-hour special reception in Nelson. John Mills is currently Study Area Leader in Guitar Studies at the Royal Welsh College of Music & Drama, Cardiff, and was a professor at the Royal Academy of Music, London for twenty years. He is an Associate of both the R.C.M. and R.A.M. and is a Fellow of the City of Leeds College of Music. In 2012 he released his first and highly acclaimed DVD Evolucion, exploring the development of technique and repertoire from 1860 onwards.